By default, Windows systems will allow low privileged users to create directories (but not files) in the root of the `C:’ drive. In this post we ask if that’s really a security problem and ultimately conclude that, yes sometimes it can be.

Depending on the version of Windows, various low privileged users are allowed to create directories in `C:\’. On Windows 7, for example, “Authenticated Users” are: 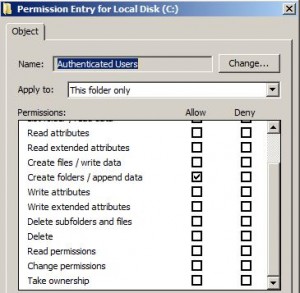 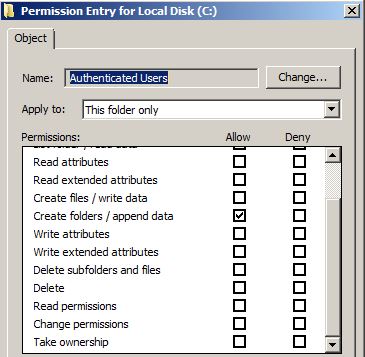 Or if you prefer the output of `cacls’, you can see this as the special permission `FILE_APPEND_DATA’:

On Windows 2003, you see something similar, but for the `Users’ group:

(Don’t let the `FILE_WRITE_DATA’ confuse you – that’s an “Inherit Only” permission).

If we apply the principle of least privilege here, we’d probably conclude that normal users don’t really need to create directories in the root of the `C:’ drive, so should not be allowed permissions to do so.

But, in terms of specific security concerns, what’s the worst that could happen?

I used procmon to show me all the processes where file access resulted in a “NOT FOUND” error. The green ticks show the simple filter I used: 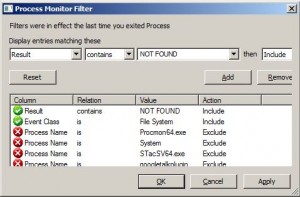 I opened up a few different programs to observe the various failed file access attempts and saw this one for `C:\lib’:

The best case for an attacker is that program will load some sort of code (e.g. DLL or EXE) from the directory.  Next best case is some sort of configuration file that could cause the application to misbehave.

So the program is looking for some python libraries!

After some experimentation, I found I needed to create `os.py’ and `site.py’, then the program would execute those files when it loaded.  I create a simple PoC along the lines of:

So just before we attempt to exploit the program with our evil Python scripts, the directory and permission look like this: 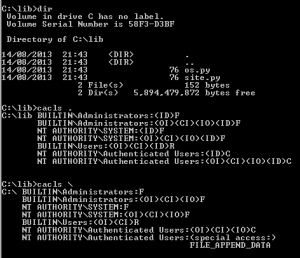 An exploitable set of permissions

After we launch the program, we can see it has run our evil payload: 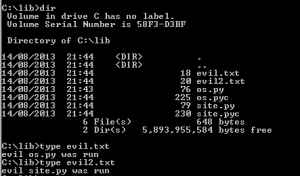 Our evil Python library has been executed

No PoC is really complete without running some actual OS commands. However, I found this slightly problematic. Normally I’d do the following:

But in this case, we’ve replaced `os.py’, rendering “import os” somewhat useless. I considered a few workarounds including calling out to WinExec() in `kernel32.dll’ via ctypes – but I didn’t have ctypes available in this environment. Eventually I found the simplest route was to load the real `os.py’ (which lives in `C:\python27\lib; on my system):

Note that we prepend to the `PYTHONPATH’ in order to look for `os.py’ in the correct location first.

This correctly runs `whoami.exe’ and logs the output of who ran the program to a file. In this way our evil payload records all the unwitting users we could have run OS commands in the context of.

We’ve shown how a pretty low-tech approach to bug hunting could uncover a vulnerability that is made exploitable by the default file permissions on `C:\’. This could allow a malicious user on a terminal server (say) to cause other users to run code of their choosing. A simple privilege escalation attack – at the very least a horizontal privilege escalation.

In this case, the principle of least privilege would have saved the day.